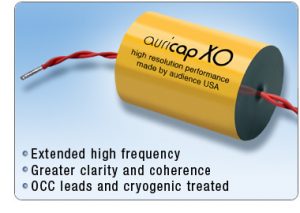 Auricap film capacitors are not polarized. However, Auricaps have an outside foil (side of capacitor marked with black dot) that is a very useful noise shield when input and output impedances are considerably different values and it is connected to the lower impedance. 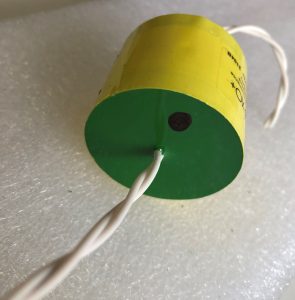 1)      In all coupling applications the input to the Auricap should be the outside foil and connected to the signal source or circuit output with the opposite lead/inside foil continuing on to the next circuit input.

2)      In all power supply decoupling applications the outside foil should be connected to ground and the opposite lead/inside foil connected to the voltage to be decoupled. This is true for decoupling either voltage polarities.

Auricaps will blossom during the first 50 hours of use as they break in for most applications. At first they will be a bit stuffy so please be patient to allow for the magic of these high quality audio grade capacitors to unfold. However, for use in electric guitars, for example, the signal level is so low it could potentially take years for break-in.

Always bypass power supply capacitors. This maintains a low source impedance to the power supply over a wide bandwidth. If budget and space permit it is good to use multiple value power supply bypass capacitors with the smallest value being installed directly at the active device. (Tube or transistor.)

Matching will result in no audible benefit except in critical equalization circuits such as the RIAA equalization in a phonograph preamplifier. There is a common misconception that tolerance is somehow related to a capacitor's quality. When selecting capacitors for coupling, bypass or crossover networks there will be no audible benefit. However if you still want your Auricaps matched we will be happy to do so.

Keep Up With Audience