Q: Can a cone driver deliver high frequencies as good as other high performance tweeters?

A: There are no laws of physics that dictate that a large driver cannot reproduce clean high frequency tones; in fact, in terms of wavelength-to-transducer size, ultrasound and SONAR routinely use “huge” pistons for the given frequencies involved, and do so without frequency response issues. In terms of extension/impulse response there is NO restriction on accuracy of reproduction for two drivers that have the same on-axis frequency response. For any 2 single drivers, if the frequency response is the same then necessarily by the Fourier Theorem we must have the exact same impulse response (and in fact, the same phase response, via the Hilbert Transform). Time and frequency are two sides of the same driver, so to speak. If you have a 1” tweeter that is flat to 25 kHz then falls off, and you have a 3” driver that has the same frequency extension and fall-off, then the anechoic impulse responses will be the same; we see the same results in the frequency and time domain.

Given this basis, the argument CANNOT be made that a 1” tweeter will necessarily have “more accurate” impulse or rise-time measurements UNLESS they have better high frequency measurements. Furthermore, realizing that the A3 is quite extended to nearly 30 kHz, there are few tweeters that can match the impulse response of the A3, let alone better it.

It is true that a larger piston diameter will necessarily have a narrower dispersion; this is the well known effect called “beaming” arising from the radiation impedance of a pistons relative wavelength. A single 3” driver will not have as wide a dispersion of the high frequencies as a 1” dome tweeter. However, that is true for an array of small drivers as well; they will have narrowed dispersion in the large-dimension of the array. It is a feature indeed, a goal of the ClairAudient line arrays to reduce dispersion outside of the listening area, so as to reduce interaction with the room. We do not want wide dispersion in the horizontal (we get dispersion control in the vertical from the line array configuration). That is why we designed the shape of the cabinet as it is a natural toe-in results in a very even and balanced listening area and a reduction in dispersion so that off-axis energy is reduced and not reflected off the rooms of the wall. We also want the higher frequencies, those above 3-4 kHz, to be attenuated on the off-axis response because those are the reflections that are most affected by amplitude. Delays and comb filtering of the reflections cause an audible degradation in the image and the perceived neutrality of the response. Our hearing is dominated by the amplitude domain (not time domain) at the higher frequencies, meaning that reflections which cause comb filtering effects are especially detrimental to the total experience. Combined with the fact that above 7-8 kHz our perception of imaging is not just amplitude/level but also precedence (arrival locking in our perception of source; see the Haas effect) based, eliminating echoes and reflections allow for a better reproduction of the entire image.

And this is where the benefits of a crossoverless design really shine; we have a very continuous dispersion off-axis; it is linear with frequency. That is not to say it is FLAT; it is smooth and linear, with a continuous reduction in off-axis output as the frequency is increased. A typical two-or-more way speaker will almost always have discontinuities in the off-axis response about the crossover point because of the change in off-axis radiation from one driver to another. By eliminating the crossover, and using all the same drivers, we have eliminated this change. As a result, when combined with the reduced off-axis response in the higher frequencies, we end up with a better image especially in a typically mid to live room.

There is a benefit to the larger driver as well, that of power compression. Admittedly, there is little sonic energy in the high frequencies and thus power compression of tweeters is off little consequence. The real issue is that the woofer or midrange will experience considerably more power compression than the tweeter, meaning that the dynamics of broadband signals are compressed in the lower frequencies and NOT in the higher frequencies. This means you have, essentially, a frequency and level dependent compressor acting on the larger drivers, and not on the tweeter, with the characteristic harsh sound that many multi-way speaker designs take on as you turn them up. It is not that the tweeters are getting overdriven or pushed too hard; it is that the woofer cannot keep up and the result is an overly-loud tweeter relative to the mid or woofer.

Having a speaker that compresses equally (and they ALL compress) at all frequencies is subjectively much better; the speaker does not take on such a harsh, overdriven sound. The balance is much smoother and continuous as you go from quiet to loud to obscene; it does not become brittle or harsh, just “congested”, which in our opinion is the best way to indicate overload. Complain with grace, so to speak!

Overall, we know of no physical reason why a dome or ribbon tweeter would perform better than a cone driver, if you do not take dispersion into account. And in fact, the controlled dispersion can actually be used to an advantage.

We can all agree on a technically “perfect” solution for a given problem; however, every room and every listener is a different problem set, and thus one must always consider compromises in design! Given this truism, we believe the use of extremely wideband drivers in arrays is a very worthy and effective overall solution. 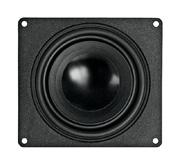 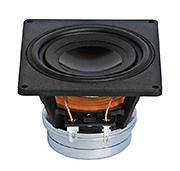 Keep Up With Audience